Managing finances is less stressful with a little assistance

Jay fell in love with snow when he moved to Massachusetts from Arizona in 1980 and Massachusetts has been home ever since. He spent his career as a chef and especially enjoys preparing and eating Mexican food with bold flavors. As Jay got older and faced some chronic health challenges, he retired and began living on a fixed income.  With a tight budget, he used his maximum credit line on several credit cards and could no longer make the minimum payments.  He then used a “debt consolidator” to reduce his monthly payments.  At this point, he thought it would be a good idea to speak to a money manager to confirm or correct his decision regarding the consolidator. Jay’s Springwell Care Advisor connected him with the Money Management Program that assists seniors with managing personal household budgets, paying bills, keeping track of banking records, and handling other issues related to personal finances. Trained volunteers are matched with individuals to provide this one-on-one service. 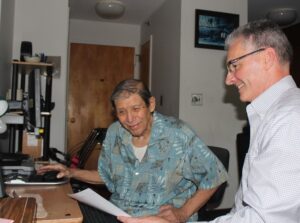 Don, an experienced agile product manager, was looking for a new volunteer opportunity, saw an article about Money Management volunteers at Springwell and thought “I can do this. I have been helping my mother with her finances for years. I have the skills to make a difference for someone else.” Don applied and was paired up with Jay. That was about 2 ½ years ago but the jovial bond between the two of them makes it seem like much longer.

Don’s first project was to review Jay’s agreement with the debt consolidator and found it to be helping Jay, so they left that intact and focused on other areas to improve Jay’s financial situation. About nine months after they met, Don helped Jay untangle the aftermath of a financial scam.  Jay took a phone call where scammers guessed that he had a virus protection program for his computer, told him they had accidentally overcharged him and needed his bank account number to refund the overcharge. Jay complied and they called again saying that they put too much back into the account and the bank wouldn’t let them reverse it. This time they convinced Jay to purchase gift cards and mail them to an address to take care of their “overpayment”.  After doing this, Jay realized it didn’t make sense and called Don. Despite reporting the crime quickly, it wasn’t possible to recover the lost funds. Don helped Jay explain to his bank how this scam led to an overdraft in his bank account. Don helped Jay restore his good standing with the bank and they changed Jay’s account to a senior account with reduced monthly fees.

Don and Jay meet regularly to manage Jay’s finances. Jay is glad that Don has convinced him to avoid scams by not answering the phone if he doesn’t recognize the number. With support from Don, Jay has learned that, if it is important, the caller will leave a message and he can call back.  Jay also knows he can call Don if there is a request he is unsure of or if other financial questions come up. As Jay has continued to pay off his credit card debt, Don has advised Jay on practical ways to live within his means to avoid additional debt.

Jay says that it is good to have someone like Don that he can trust. Knowing that Don is part of Springwell’s program gave Jay the confidence to accept the help. “It is great to have another set of eyes as my backup to review my finances,” adds Jay. Don and Jay enjoy each other’s company and Don is so glad that he can be helpful to Jay. If you are age 60+ or an individual with a disability, learn more about how our Money Management Program can help you. If you would like to make a difference in the life of someone who will benefit greatly from your help, you can join the Springwell volunteer team as a money management volunteer